It hurts my heart to watch the news more often than not, so I check up on what’s happening in the world with news sites and apps, and I typically keep my comments to myself but I was watching the Trayvon Martin closing statements today as I waited in the doctor’s office with my mumsi and I had some thoughts.

Unfortunately, despite being prepared, wearing no jewelry, not smuggling kinder eggs (AHEM.), and following protocol of 3oz liquids (cake frosting, by the way, is considered a liquid) I still am randomly selected for extra screening, bomb-swabbing, or having my meticulously packed bag unpacked at the clumsy hands of a TSA representative 8 out of 10 times that I fly.

And why? A twenty-something young woman poses a threat to national security?

What I’m saying is that like Trayvon Martin, it is because of the color of my skin that someone with very little actual power in the world has tried to have some kind of power over me. And the difference is that I walk away from being searched at the airport annoyed, but alive.

The same cannot be said for Trayvon Martin and for so many like him.

But I don’t think this is a new problem for us, as a society. We are afraid of what is different from us.

“Fear of the unknown. They are afraid of new ideas. They are loaded with prejudices, not based upon anything in reality, but based on… ‘if something is new, I reject it immediately because it’s frightening to me.’ What they do instead is just stay with the familiar. You know, to me, the most beautiful things in all the universe, are the most mysterious.”

I am keeping my thoughts and prayers with the family who lost their 17-year-old son, because I don’t know that I can tell you what ‘justice’ means, but I can tell you that Trayvon Martin doesn’t have the opportunity to go to college, have a family, fall in love, and that there are parents out there that had to bury their child.

The semester is over, and as such I feel like I’m just a hop, skip, and a jump from 2013. I’m so excited to be spending my new year with some of my favourite people — vacation can’t come soon enough!

I’ve had a hell of a year. I realized this when I mentioned it to someone a couple of days ago: I have been waiting for the year 2012 since about elementary school. My idealistic 9-year old self mathematically figured out that I’d be done with college in 2012 and that that would be the greatest accomplishment of my life (no, my 9-year old self didn’t even have an inkling of the notion of grad school).

So I decided, why not take a look at the last year (mostly in pictures) and relish in what an amazing roller coaster of a year this has been?

The year got off to a great start. In January I got back to school, auditioned for grad school, danced in a flash mob, baked like crazy, and had some rough times that the best friends I’ve ever known got me through. The year continued on this fantastic path with February and my birthday being perfect (dancing, Twyla, sangria). This month I rode in my first ambulance, which was terrifying and traumatic, but I can look back on the awkward medic who showed me and Emily his mouth tattoo fondly. Also, doing downward dog in the ER.

My foxy lady sisters received their rings in February. It doesn’t matter how many other red classes or blue classes there are, you guys will always be first in my heart ❤

March rolled around and spring break was an adventure in Atlanta, with making pizza, exploring the city, and doing photo shoots in the park. The last weekend of March, Studio Dance Theatre travelled to the illustrious city of Albany, Georgia for some good ole dancing and horse metaphors. (Sugar cubes, anyone?)

In April I celebrated Bertha’s birthday with some furious scrap booking and I performed in my last ever concert at my undergrad. It was bittersweet. I was so privileged and blessed to have had four years of performing with such dedicated and artistically vital people. This month FLEW by.

May was probably one of the hardest months for me. Not only did I get myself into ridiculous situations that I should have had better sense than to have done, but I graduated from the place I’d known as home for four years.

Graduation always seemed like this elusive far-off dream until it actually happened. I couldn’t have been more joyed than to spend this day with my family, friends, and Agnes Community. The morning of graduation someone told me they’d light some fireworks in my honor, I couldn’t have been happier.

The whole summer was a whirlwind of travelling and exploring the world and figuring out who I am! I wrote about this last month I think so I don’t really need to indulge you anymore on that. I made some mistakes, I did some awesome things, I grew up. (Even though there’s still a lot of that to be done…) If you missed it, check it out in my thanksgiving post! 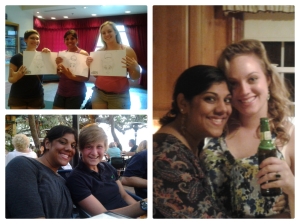 The final leg of my summer was August — the month to challenge all months. I was in four different time zones, and six different airports over the course of the month. My sisterbear got engaged, I visited Seattle, I bought a car, and I started graduate school. Seriously, I don’t remember being still for more than a few hours over the course of this whole month, and I absolutely loved it.

Lucky for me, September was a month of recuperating and readjusting to the workload of grad school. I spent most of my free time in the library.

October and November blend together in my brain. I was in Atlanta, I was in Orlando, I was at school, and I was at J’s apartment.

I got to see both of my sisterbears this month and  Sandy ruined the family reunion that was meant to happen. I voted for the second time in November and had severe anxiety the entire week before the election, and I was moved and proud of all of the people that got out there and rocked the vote. It was a beautiful display of nationalism for the democracy in which we live.

In Atlanta I was graced with beautiful dancing, in Orlando I was checking out wedding venues for my sisterbear! In any other time I had free I was writing papers and doing all the research in the world. (and hanging out with my BFF Evie) 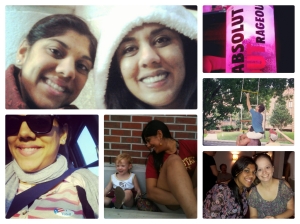 And now we’re here. December. We’re twelve days in and every day is a new adventure. I’m growing to love the bhum-thai that I am becoming, and I am learning more and more about dance, about the world, about politics, and about the connectedness of human beings.

This blog is a means to connect to human beings. Of course it doesn’t make up for getting out there and talking to people (which, let’s be real, if I get started, I never stop) but it’s a means to share and communicate with those around us (geographically, or on the internet).

You all have made this year beautiful, and amazing, and sometimes heartbreaking, and most of the time absolutely joyous.

I’m looking forward to the next year of adventuring and seeing the world!

I don’t typically post about my activism on here, maybe because I’m narcissistic and I talk about myself all the time, maybe it’s because I avoid discussing the heartbreaking real-world things that exist.

However, I make this exception tonight.

Recently, over at SimpleMedicine, a post was made (by my sisterbear, I might add) that discussed Being Bullied. Read the article here.

October is National Bullying Prevention Month and so tonight I make an exception to talk about how important it is to let the people in your life know that you are there for them, no matter what.

I recently saw this short YouTube video from The Trevor Project featuring some of the counselors that answer the Suicide Prevention Line for LGBTQ youth. The stories they share are heartbreaking. Kids who are kicked out of their homes, ostracized by their friends and family, and feel a deep, uncontrollable self loathing for who they are.

The thing about this that hits home for me is that I know people who have gone through this. I know people my age and younger who struggle with their sense of self-worth because of what other people tell them they are, and that is simply heartbreaking. No one should ever feel like they shouldn’t live anymore because of other people’s prejudices. No one should have to feel like they are unloved, or unwanted, or unaccepted. But they do. And I know that. I am only one person, but I want those people in my life to know that they are loved, they are wanted, and they are, above all things, perfect the way that they are.

You are perfect the way that you are.

You are not alone.

Be proud of who you are.

You do not have to go through this alone.

The Trevor Project implores supporters/viewers to let the people in their lives know one thing: that they have someone to talk to. Always and unconditionally. The project they’ve launched is titled quite simply, Talk To Me. Their website lists Warning Signs and how you can help someone who is suicidal and feeling alone.

I have been blessed to have never gone through the things that many youth go through. My family is so important to me, and their support means everything — I can’t imagine going through life without that. I know many people who have also been blessed. I know many who haven’t been as lucky and struggle with it on a daily basis. It is important to me that those people, who are so beautiful, and smart, and funny, and have so many gifts, know that they have at least one person to talk to.

You always have a friend.

Consider reaching out to the people in your life who might be internally struggling and letting them know that they are not alone. That they have someone that they can come to. That their life is worth living.

Consider standing up to people who mistreat others for no other reason than unadulterated prejudice, bigotry, and hate. People who either don’t know, or don’t care about the damage they’re doing to another precious human life.

“Things will get easier, people’s minds will change,

and you should be alive to see it.”